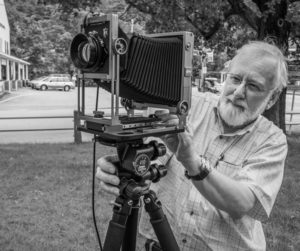 Gary Samson is a fine art photographer and photo educator who has received numerous awards, grants and fellowships for his work during the past forty years. In 2017, Governor Chris Sununu appointed Gary the 7th Artist Laureate of New Hampshire. Gary has taught photography courses and workshops regionally and internationally since 1981 and his professional career in photography started in 1971 at the University of New Hampshire where he served as the University Filmmaker and Manager of Photography.

In the fall of 1998 his work was included in the exhibition Moments in Time: Master Photographs from the Currier Museum of Art’s permanent collection and in the fall of 1999, a portfolio of his portrait work was exhibited in Andrezieux-Boutheon, France at the invitation of the French government.

Cultural photography and documentary filmmaking assignments over the past four decades have taken him to Russia, Ghana, Greece, Guatemala, Peru, Ireland, France, Labrador, Belize, Cape Breton, New Orleans and the Isles of Shoals as well as the White House. At UNH, Gary produced ten films exploring the history and culture of the state of New Hampshire and these documentary films have been aired locally, regionally and nationally on cable broadcasts such as Cinemax, and on commercial and public television stations.

After producing a film on the life of internationally acclaimed portrait photographer Lotte Jacobi, Gary spent six years working with Ms. Jacobi cataloging her archive of 47,000 negatives which were donated to the University of New Hampshire in 1981. Ms. Jacobi’s archive, which is housed at the Dimond Library includes portraits of Albert Einstein, Robert Frost, Eleanor Roosevelt, Thomas Mann, J. D. Salinger, Marc Chagall, and Kathe Kollwitz, to mention just a few.

He traces his appreciation for and love of photography to a summer job he had fifty years ago at the Manchester Historic Association. One of his responsibilities was to make contact prints from the glass negative collection documenting the city of Manchester and the Amoskeag Manufacturing Company. This extensive archive of prints and negatives impressed upon him the importance of photography as a tool for easily sharing history and culture with a wide audience.

After joining the high school camera club in 1968, he set up a darkroom in the corner of his bedroom, developing and printing 35mm black and white negatives. Gary’s obsession with photography had begun. The images of Paul Strand, Alfred Steiglitz, Lewis Hine, Arnold Newman and Lotte Jacobi have significantly influenced the direction of his work and led him to embrace large format cameras for much of his portrait and documentary photography. Gary’s fine art portraits are primarily made on black and white film or through the collodion wet-plate process using either 4×5, 5×7 or 8×10 inch view cameras. His favorite printing mediums include gelatin silver and platinum-palladium prints made from in-camera negatives. Craft is a very important part of his work and he enjoys every step in the process of bringing a print to life and presenting it to an audience.

Gary’s passion and accomplishments in photography led to his 2001 appointment as Chair of the Photography Department at the New Hampshire Institute of Art, Manchester, NH where he taught both digital and traditional film based photography courses as part of the BFA in Photography program. His retirement in 2017 has provided him with the much needed time to start organizing his archives of prints and negatives and to work on a number of fine art photography projects.