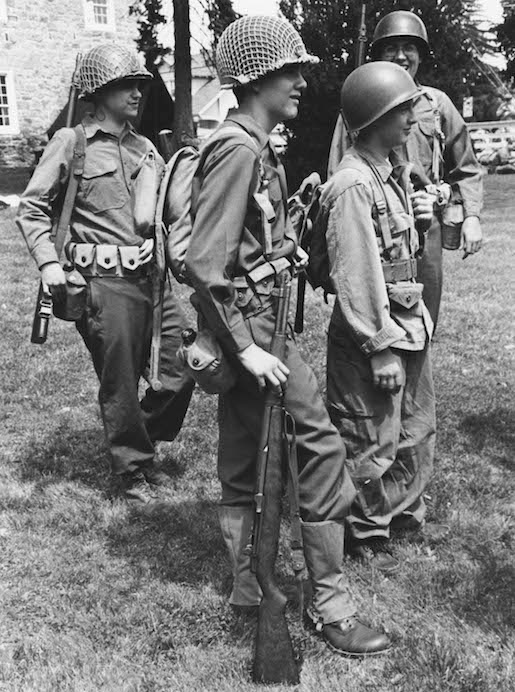 The title of this project, A War Without Blood and Gore, comes from a line in a Vietnam War-era protest song by the American singer-songwriter Phil Ochs entitled “Draft Dodger Rag.” It goes: “If they ever give a war without blood and gore, I’ll be the first to go.”

I photographed World War II re-enactors at events organized for the public in 2014 and 2015, as well as aboard a restored1944 Liberty Ship wartime freighter – a time frame that roughly paralleled the 70th anniversary of the last year of the war. They used as many authentic period artifacts as possible – weapons, vehicles, uniforms, etc. – to recreate the lives of the soldiers, sailors and aviators who fought in the Second World War.

Most of the re-enactors were men in their 20s and 30s, although there were some women and children dressed in “home front” period clothes or in the uniforms of various women’s military branches; many of them told me of hearing the stories of grandparents who’d been in the war. I got a sense of their longing for those “good” years, for a simpler time, when there was a sharp delineation between good and evil. World War II was perceived as the last war that the U.S. decisively won, when the entire country pulled together in a common existential struggle.

The re-enactors were very knowledgeable about the World War II period and happy to answer questions. They gave various reasons for re-enacting: some wanted to pay homage to the war’s veterans and their sacrifices; others were living history buffs who wanted to bring a past era to life for modern audiences. I also suspected that a number of them liked the camaraderie, the chance to camp out and to fire off guns with blank ammunition in a harmless and more or less socially-acceptable way. It was unsettling to see German uniforms, some of them with SS collar tabs. However, these German-uniformed re-enactors assured me that they didn’t share the philosophy or have any admiration for the Nazis; they felt that somebody had to be the enemy.

I photographed the re-enactors with cameras that would have been used during World War II – 35mm and medium-format rangefinders — and black and white film that I processed and printed myself. I believe that, in many ways, this project documenting re-enactors reflects the present United States, with all of its ambivalences and uncertainties, as much as it recreates the vanished world of the 1940s.