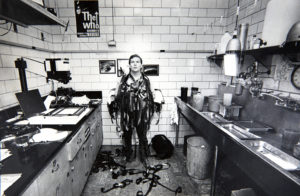 As a high school student in the late 1960’s, I became interested in photography. A very kind mentor took me to look at used cameras at Stansbury Pharmacy in Baltimore. He told me that I should buy a really nice used Kodak Retina and Weston meter that were on display. I was hesitant to spend $50.00, all the money I saved. He said if I didn’t buy it, he would. That was all it took! -And I’ve never looked back.

As a rescue medic in Vietnam, I really became immersed in Black & White photography. Those negatives have their share of mistakes, but they are dear to me.

Later, at the end of my sophomore year of college in 1975, I was offered a job as a staff photographer on a small, but visually-oriented newspaper. Reflecting on that first job, I was probably hired more due to the fact that I could actually write a caption, than the quality of my portfolio.

Throughout my career, I kept a home darkroom. Sometimes it was apart, with pieces in storage, or loaned out to other photographers, like in 1984, when I took a job half-the-country away at the Omaha World-Herald. In 1990 I moved back East to be the Director of Photography at a small New Jersey newspaper and started retrieving the pieces of my darkroom. Then I worked as a Picture Editor at the Associated Press in New York City. Staff photographer at the Bergen Record followed. And finally as the Associated Press’ supervisor of photos for the state of New Jersey. In 2005 I rebuilt my darkroom. This past Summer (2019), a year after I retired from the AP, we purchased a new home and the darkroom is in the process of being re-made one last time.

After working professionally in digital capture since 1998, I’ll tell anyone who will listen that there is NO comparison to the process of seeing and making a photograph, developing the film and making a print in the darkroom. For me, there is so much more pleasure and pride in the analog processes than there ever will be in making computer keystrokes and pushing the ‘print’ button on a printer.

I have fiber prints that I made as a novice printer in the 1970s that look as good as the day they were printed. -But I have digital prints from late 1990s- early 2000s, that have always been properly stored in the dark in archival print storage that have very obvious degradation and color shift.

Old habits are hard to break…I’m still shooting AP and magazine assignments. But as I unwind that part of my career where I made photographs to satisfy the needs of others, I’m becoming more determined to make images that satisfy me. I’m taking a serious approach to alternative and historic processes in large format and trying to learn as much as possible from those who went before.