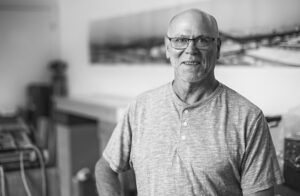 Rob was born and raised in New Jersey, though he has spent much of his professional career on the road.  He has visited fully 48 of the 50 states and hopes to add Alaska and Montana to his tally.  He was born in Plainfield, New Jersey in October of 1956 and went through the public school systems in Dunellen and Bridgewater, and then on to Rutgers University, attaining a Communications BA in 1979.  Twenty years later, Rob went back to school and secured his certificate in Historic Preservation from Drew University in 1999.

During a period of intern employment with the USDA Forest Service, Rob met and was later assigned to bird photographer L. John Trott.  This was a pivotal experience, and John became his mentor and friend.  Rob turned his attentions to photographing birds at every and all opportunities and garnered quite a few publishing credits, including a cover of the National Audubon Society’s American Birds journal in July 1981, and numerous inclusions in their and others’ guidebooks, bird books, magazines and journals.  But with all of this, Rob quickly discovered that freelance income derived from natural history subject matter didn’t support a growing family so he turned his vocational attentions elsewhere.

At the same time, another passion was taking shape.  Within the context of college study, Rob became aware of the large format B&W film tradition and, through intensive photographic study, this concentration burgeoned into a life-long obsession.  While influenced greatly during his studies by the work of numerous photographers, including Emmit Gowin, Marilyn Bridges, Wynn Bullock, Jack Boucher and David Plowden, he had the distinct privilege of studying with Ansel Adams (on full tuition scholarship to the Friends of Photography Carmel, California workshop), Linda Connor, Paul Caponigro, Jay Dusard, Bruce Barnbaum, Michael A. Smith and Paula Chamlee and others and attended a Master Class, based on portfolio review, with George A. Tice at the New School in New York City in the art of black and white silver printing.

He has operated Rob Tucher Photographic Documentation (PhotoDoc) as sole proprietor since 1979, providing, in particular,  photographic interpretations of cultural remains and resources, but his introduction to historic structures photography began by chance in 1983.  Since, he has produced a huge volume of work to the exacting standards of the Historic American Buildings Survey (HABS), the Historic American Engineering Record (HAER) and the Historic American Landscape Survey (HALS) and has recorded historic structures throughout the United States, from Maine to southern California, the State of Washington to Florida, in addition to Puerto Rico and Hawaii and routinely shoots in the formats accepted by HABS, HAER, and HALS – 4″x5″, 5″x7″, and 8″x10.”  Rob utilizes an extensive range of camera formats and film types that also include 7″x17″, 8”x20”, panoramic No. 10 Cirkut photography and B&W 5”x7” roll film aerial.  Rob has an extensive arsenal of modern and vintage equipment that allows him to approach his passions and assignments with the most appropriate tools.

It is, actually, hard for me to entertain the notion that I have been producing art within the context of my documentation efforts for decades, but then again critics have found artistry in so many government-sponsored assignments, from the Farm Security Administration documentation of Depression-era Dust Bowl devastation throughout America, to historic photographs of forestry practices and forests of the USDA Forest Service photographic archives.  I have produced thousands of large-format negatives while adhering to fairly specific guidelines as presented by the National Park Service, but I have always found a certain amount of artistic revelry in visually dissecting a condemned or at risk structure while plying my craft.  The sheer joy in finding a composition that sparks creative juices within the confines of an assignment and, quite frankly, at times a seeming exercise in drudgery, can be reward enough for being sent out in inclement weather, impossible conditions or to dangerously teetering structures.

One imbedded and consistent thread throughout my work is certainly that of a concentration in and on historic structures.  While cognizant that I am possibly the last person to expressively appreciate the structure before me, I am also keenly aware that I can be, at once, a privileged observer and a historic structures Grim Reaper.