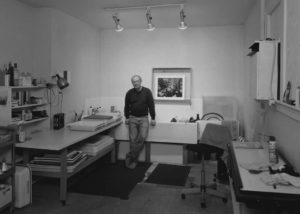 A Brief Survey … I learned the basic black and white process as a summer activity at Camp Dent near Stroudsburg, Pennsylvania, in the early 1960’s.  My first 35mm camera, a Christmas present in 1967, was an East German made 35mm Exa.  I traded it the next Summer for an Olympus Pen F half frame at a kiosk in a West Berlin train station.  Dad, an architect, built a darkroom in the basement of our farmhouse by the end of the year.  Everything just flowed from there.

After four years in the Air Force at the end of the Viet Nam era I began my photographic journey in earnest at Kutztown University in Pennsylvania, then transfered to the Massachusetts College of Art where I received a BFA in Photography.  I remained in the Boston area until 1986, working as a printer for photographers including Aaron Siskind, Carl Chiarenza, Olivia Parker, Lee Friedlander, and Dr. Harold Edgerton.  I moved back to the Lehigh Valley where I continue producing archival black and white silver prints for  clients that include Larry Fink, Marilyn Bridges, Builder Levy, Judith Joy Ross, and Joseph Rodriguez among others.

In 1995 I received a MFA from the University of Delaware.  I began teaching the silver process at Muhlenberg College in Allentown, Pennsylvania in 1996 and am still there today.  Other regional schools I’ve taught black and white photography classes at include Lehigh University, Lafayette College, and Kutztown University.

Also in 1996 I was awarded a contract by the HABS/HAER/HALS division of the National Park Service to provide 4×5 B&W photographs of the roads and historic features of the Blue Ridge Parkway and Great Smoky Mountains.  Little did I know, the first of many to come.  From the battlefields of Gettysburg to WWII ships on the James River in Virgina, a border crossing station in upstate New York to a tunnel through Scotts Bluff, Nebraska and a warehouse in Atlantic City, Section 106 of the National Historic Preservation Act opened the door to unimagined experiences.

My personal work is rooted in the traditions of “Straight Photography” as defined by John Szarkowski, but nurtured during a time before I knew what that meant.  I’ve always leaned toward landscape.  Since the mid 70’s I’ve exhibited solo and in groups from coast to coast.  Many individuals have collected my photographs as well as the Philadelphia Museum of Art, George Eastman Museum, Museum of Modern Art, Library of Congress, and the Ashville Art Museum.  Corporate collections include Capital One Bank, Hawk Mountain Sanctuary, and Mack Trucks.

Just had a call from someone up in Schuylkill County with vintage family glass plate negatives to print.  The journey continues…