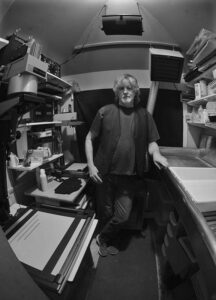 As a kid I was inspired to pick up a camera by my uncle who was a photography teacher at a community college in Connecticut back in the early 70’s. I was just going into high school and he gave me the idea to be a photographer for the school newspaper. That meant learning how to handle a Yashica twin lens medium format camera and stumble through B-W film processing in a darkroom. But I thoroughly enjoyed it. My first camera was an Argus Cosina 35mm that I bought in the mid 70s.

At that time in my life I was really into music and going to concerts with my camera. There was a local weekly newspaper called the Mercer Messenger that used to publish my photos and concert reviews that gave me the access. I really didn’t know what I was doing. I probably was more into partying than being a serious photographer but I still got some great images that I still have.

In 1987 I was living in south Florida working as a musician in a band and photography was a hobby. They were preparing to launch the space shuttle Discovery on the first return to flight following the tragic Challenger disaster. I really wanted to photograph it. I contacted a local newspaper in Pompano and offered to cover it for them for free. To my astonishment they accepted. That experience would put me in contact with some of the best photographers in the world who were on hand to document the flight. This gave me a priceless opportunity to learn from these people some of who were true legends.

In 1996 I was hired as a fulltime photographer with the Princeton Packet and I stayed with them for 20 years leaving as chief photographer when they downsized in 2016. Currently I freelance for NJ.com and for Polaris Images in NYC among others. I always travel with a B-W film camera. I’ll use Nikon, Leica and if the opportunity presents itself I’ll use larger formats Hasselblad, Fuji 6/9, 6/17 or 4×5.

I have had some very memorable photo experiences. 9-11, Katrina, Seeing Barack Obama rise to the Presidency and more. But the thing that was the most professionally and personally fulfilling was to use my platform as a photojournalist to reunite and document the stories of two families separated in the war in Kosovo. They are extended family now.

I have been a professional musician and art connoisseur especially in photography. But I have always had an interest in history and documentary photography. It was always intriguing to me how a photographer could go into a major historic event and produce an image, maybe one single image that could tell the whole story. Or create a tasteful artistic image of a given event. I have been lucky to have seen and work with some great photographers. I can only strive for some of that greatness.