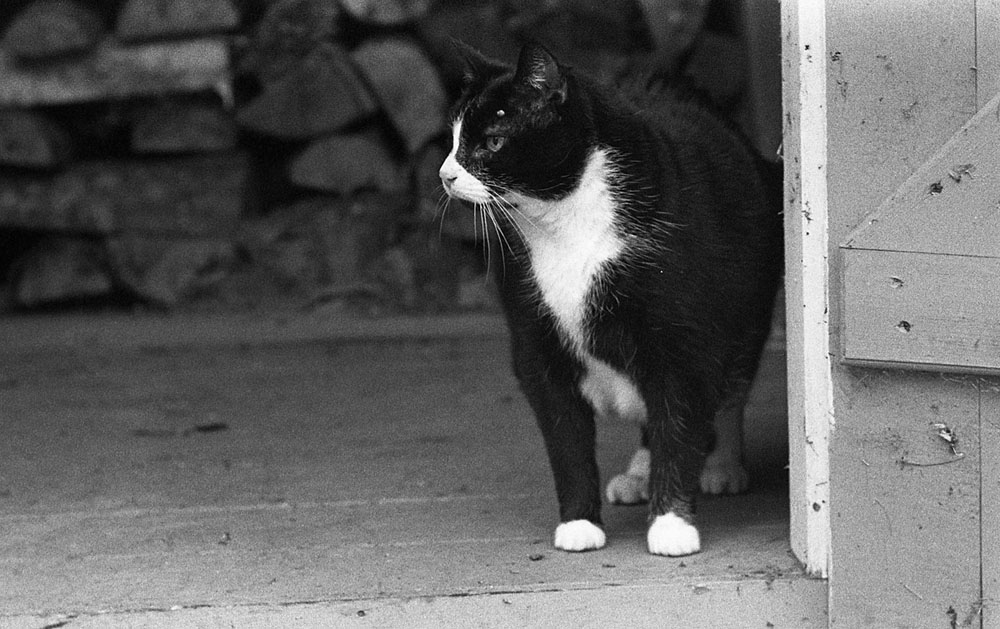 With all of us having to stay locked down and practicing social distancing, trying to make any camera art may seem like a far reach.  The whole reason for the self-quarantining is to keep ourselves healthy and getting outside for fresh air and sunshine is a big part of that.  After my mother’s passing, my wife and I were blessed with one of her two cats.  Like all of us, “Fat Cat” enjoys getting outside for a breath of fresh air.  This has led me to daily walkabouts in our yard, offering me the opportunity to exercise my visual eye and to practice my camera work.

While he prowls the yard, I prowl beside him with camera in hand.  He is described as a tuxedo cat, mostly black with a patch of white on his nose and breast; very little light reflects from his fur.  He is a light meter’s worst nightmare and a real challenge for film to record detail properly.

As Michael Marks has written in his blog (www.michaelmarksphoto.com), the important thing for us as artists is to “stay in the game”, and Fat Cat has allowed me to do that.  While images of the cat are not art – regardless of the fact that everyone on the internet seems to think otherwise – they have kept me in the game.  These exercises have allowed me to practice and experiment.  I’ve been able to practice handling my 35mm camera while sharpening my eye’s perspective by playing with different focal length lenses, plus this affords me the chance to experiment with different ISO film and developer combinations.  This outdoor camera work is giving me practice visually seeing, composing, exposing, processing film and printing.

Taking us around the perimeter of the house, these little walkabouts are usually no more than an hour long.  He has to sniff, scratch, chew and rub up against almost everything.  Then, there are the ten thousand-foot stares out into the void he does that can last as long as ten minutes or more; he can be a very patient dude.  During these slow random willie-nillie walks, I’ve found new and interesting “stuff” that I can go back to and explore more deeply.  Leaving the 35mm camera in the house with the cat to nap, I find myself packing up the view camera and trekking back outside to focus my lens on subjects I never would have seen sitting on my couch.

So, in the end I’m finding myself outside with my view camera getting the fresh air and sunshine while composing images which have the potential to be more meaningful than the fluffy, cuddly, creature snaps which brought me outside in the first place. (Note, Fat Cat is anything but fluffy and cuddly.)

My neighbors (and my wife) think I’m insane for taking walkabouts, camera in hand with an old cat, but to use a bad pun Fat Cat has shown me that old dogs can be taught new tricks.

“The artist’s world is limitless.  It can be found anywhere far from where he lives or a few feet away.  It is always on his doorstep.”